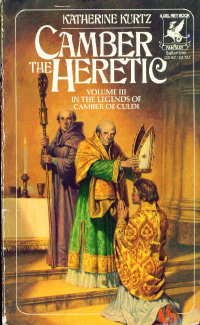 pp506; Paperback in acceptable condition; clean pages; Creased Spine with rubbing; light Edgewear but no creasing; name written on inside front pageThe novel is set in the land of Gwynedd, one of the fictional Eleven Kingdoms. Gwynedd itself is a medieval kingdom similar to the British Isles of the 9th century, with a powerful Holy Church (based on the Roman Catholic Church), and a feudal government ruled by a hereditary monarchy. The population of Gwynedd includes both humans and Deryni, a race of people with inherent psychic and magical abilities. The novel takes place in the early ninth century, beginning ten years after the conclusion of Saint Camber. The plot of the novel centers on the desperate efforts of the Deryni to protect their futures from a rising tide of human anger and discrimination. As the health of aging King Cinhil Haldane begins to fail, a small group of powerful Deryni struggle to save their race from the deadly plots of Cinhil's ambitious nobles.

Keywords: Legends of Camber of Culdi