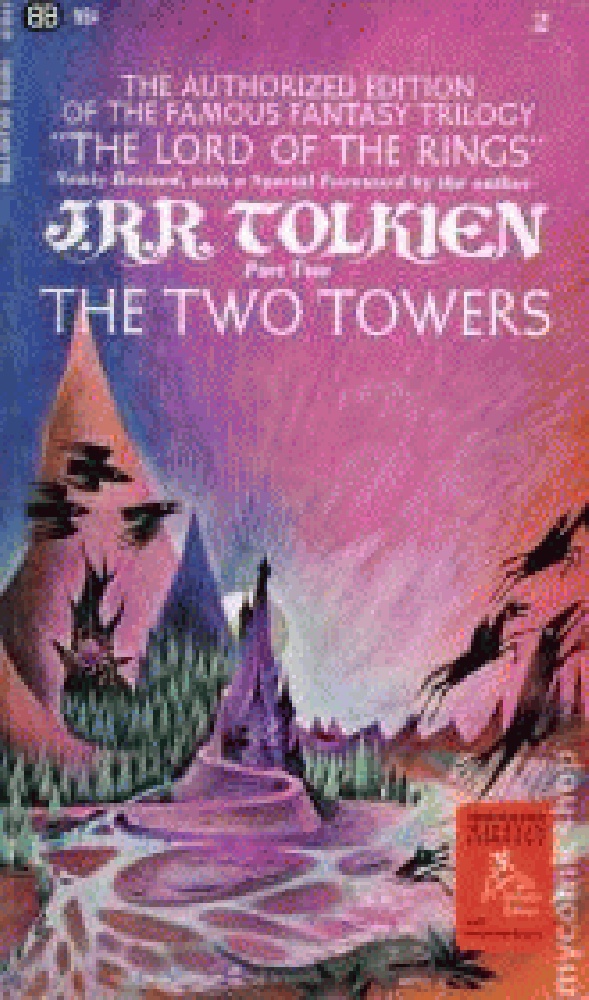 pp 447 Vintage Paperback #01534; good condition; small tears to the front and back covers; The original paperback AUTHORIZED editions of The Lord of the Rings were released in the USA in 1965 featuring the now famous triptych by Barbara Remington entitled Wilderness on the covers of the books. All three books were released at the same time in the same month. These three are dated August 1966 and are the 7th, 5th, & 4th printings respectively. For the uninitiated, a triptych are three pictures when laid side by side form a singular larger picture. NOTE: The back cover includes a note from Tolkien himself. It reads: A STATEMENT FROM THE AUTHOR ABOUT THIS AMERICAN EDITION - "This paperback edition, and no other, has been published with my consent and co-operation. Those who approve of courtesy (at least) to living authors will purchase it, and no other." Around this time, apparently a company overseas (Ace Books) was producing LOTR novels without the author's consent.THE TWO TOWERS recounts the further adventures of the band of companions introduced in "The Fellowship Of The Ring." The Fellowship was scattered. Some were bracing hopelessly for war against the ancient evil of Sauron. Some were contending with the treachery of the wizard Saruman. Frodo, unwilling heir to the One Ring, has decided that it is his task and his alone to carry the Ring back to the Fire that will consume its power for evil. Accompanied by his servant, Sam Gamgee, he is making his way eastward to the ghastly borders of Mordor, The Land of the Enemy. Their guide was Gollum, deceitful and lust-filled, slave to the corruption of the Ring. Meanwhile, his companions in the fellowship of the Ring are caught in the strategy of the traitor Saruman and pass on the battle and peril in the West.